I recently rediscovered an old love. I’ve been doing some reminiscing and writing about my first few years of college, imagining I’ll publish a zine called “Memoirs from a Sodden Adolescence.” (Would anyone read it? Who knows!) The old love I rediscovered was my textbook from “Major British Writers, Part II,” which I took at the University of Massachusetts at Amherst, 1978. (Yawn. Was anyone else in college that long ago??) 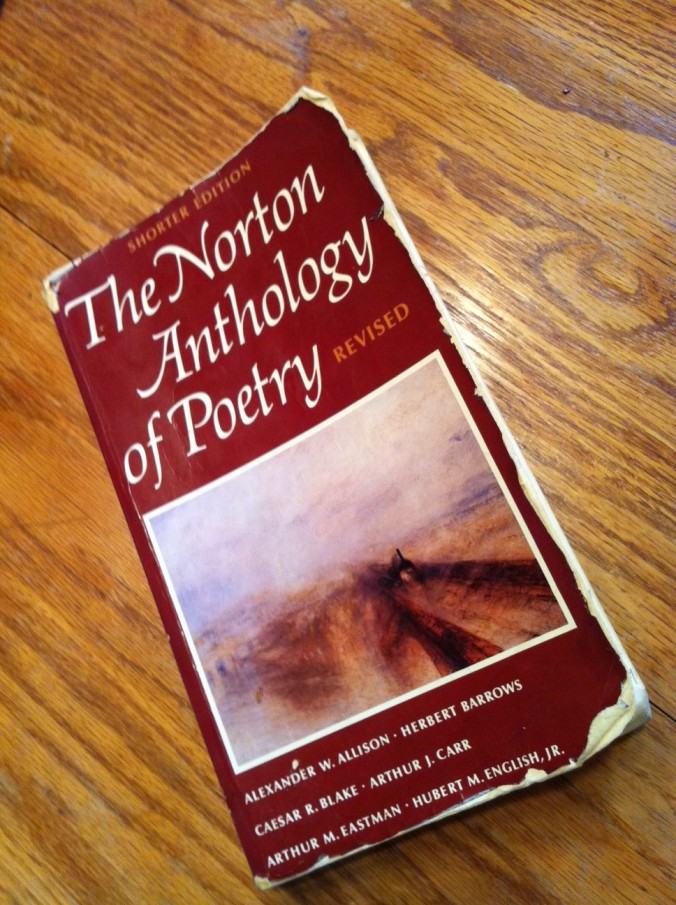 Mine was, is, and ever more shall be the shorter, revised edition of the Norton Anthology of Poetry, which academic types called simply “the shorter Norton,” a single volume only an inch thick, as opposed to the heftier two-volume Norton Anthology other introductory English classes required. We read mostly poetry, from Samuel Johnson to T.S. Eliot. I carried my book with me everywhere, scribbling wherever I was: in class, in the library, in coffee shops. It became dog-eared and soft around the edges. The cover art was a painting by J.M.W. Turner, “Rain, Steam and Speed.” I’d never heard of Turner but fell madly in love based on that one painting.

During the heat of summer, while working on a piece about the professor of that course, I frantically culled through the boxes in my attic looking for the book itself, and, after some moments of horror that I’d misguidedly sold it to Powell’s, found it. Powell’s would never have taken it, of course, full of my notes, doodles, and turned-down pages.

The book’s flyleaf holds scrawled assignments and quotes from my professor: 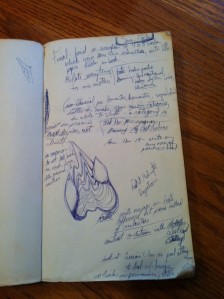 “Neo-classical, pre-Romantic, Romantic…better to be able to shift—a category is just one person’s device, not truth.”

“When doing comparisons, do not fall back on verse form; like grammar, it’s useless.”

“One page on God as nature in Tintern Abbey.”

I was just grateful to be able to distinguish between Keats and Yeats.

After unearthing the book from the attic, I started carrying it around with me, the way some people carry a bible. I’ve gotten into the habit of reading it for a few minutes on my way to doing whatever work is set before me that day. Part of my daily devotion. All of that poetry was so long ago, and I’ve never been gifted with the ability to memorize, that I am able to read many of the well-marked works as if for the first time. But even more exciting in an old love is discovering works that we never got to in that class I took a hundred years ago, and spending as much time as I want with a poem before moving on. Reading the same poem over mid-morning coffee for ten days in a row, a daily routine like putting on lotion. I don’t think much about who made the lotion or what makes it smell so good or what makes it do whatever it’s doing for my skin. I just like the way it smells and feels. Same thing with poetry, these days.

My friend Melissa has a wonderful post about “Getting Poetry.” You should read it. She asks great questions about our poetry habits; mine are as varied as my knitting habits. Some weeks I tear through knitting projects like they’re going out of style and I’ve got nothing but time. Other weeks add up to months and sometimes even years when I don’t touch needles or yarn. Sometimes I’ll stumble on a poet and take everything she’s written out of the library (most recently, Mary Karr, after reading Lit). A few years ago, on another foray into my attic, I found a box of poetry collections, mostly individual poets, that I’d stored away when I decided I really wasn’t ever going to be a poet myself. I rearranged all of my bookshelves to make room for the contents of that box, not because I’d changed my mind about becoming a poet, but because I just wanted the books around. Some of those poets were a lot younger then, and a lot less famous than they are now. It’s fun to see how they’ve grown up.