In which Sara forgets what day it is, we expand our geographical glossary, and meditate on mattresses.

It’s finally happened. Two months into my four-month sabbatical, I’ve forgotten what day of the week it is. The only reason I can come reasonably close to naming the date is because the Fourth of July happened and I heard no fireworks and saw no American flags. I thought of friends with various Independence Day traditions, and while I miss the friends with whom I associate the holiday, I don’t miss the celebratory rituals.

On Day Five of the Coast-to-Coast walk, or C2C, Mark and I left Grasmere and hiked as quickly as we could the 7 or 8 miles to Patterdale, where we had copiously arranged to meet our son who was flying from Portland to Chicago to Manchester, and then taking the train north from Manchester to Windemere and then a bus from Windemere to Patterdale. We got to Patterdale long before the bus was due to arrive and checked in with the hotel which doubles as a bus stop, to learn for the first time that the bus we’d planned to meet only ran on weekends; this was Tuesday. The end of the story was that Nathan managed to take a cab to our B&B up the road and was all settled in by the time we finally got there. He was jet-lagged and miserable, it was a miserable, wet afternoon, the 400-year-old farmhouse where we stayed smelled like wet dog and cows, and I came down with a hideous cold. But….

On Day Six we said goodbye to all that and hike the most strenuous leg of the whole trip: 16 miles, mostly uphill (or so it felt) from Patterdale to Shap. 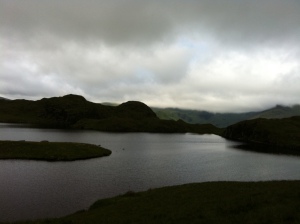 The Coast-to-Coast is like a small town that goes with you: you see the same people, not necessarily every day, but every second or third day, either on the trail, or at the pub later that day, or over breakfast. On the fifth day it seemed like everyone started at once (perhaps because all of our guidebooks had stressed what a long hard day it would be), but the trail was crowded, a long line of hikers going up the winding path from the town to this high mountain lake. 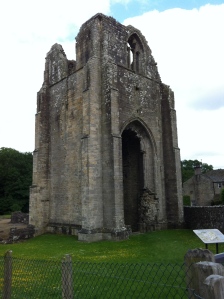 I’ve posted elsewhere about the Shap Abbey, but it’s worth mentioning again; in the middle of nowhere on the eastern edge of the Lake District, it’s what walkers see about 30 minutes before entering the town of Shap. Shap Abbey was the last abbey to be founded in England in 1199, and the last to be dissolved by Henry VIII in 1540. The original tower is all that remains in tact. After walking 16 miles I didn’t really have the chi to actually tour the abbey, so in this photo you’re seeing everything I saw! 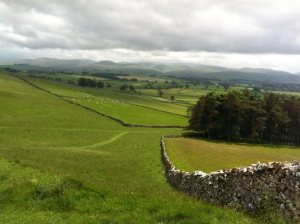 Day Seven was a much shorter hike, from Shap to the village of Orton. By now the landscape has changed considerably; we are definitely not in the Lake District anymore, but walking along stone walls through pasture after pasture in what I have always thought of as traditional English countryside; rolling hills and open spaces stitched together by stone walls and dotted with occasional trees and picturesque barns. The weather treated us better and better as the day went on and we could actually see our shadows by the time we got to Orton. We stayed in The Best B&B ever, the kind of place you might like to stay for a long weekend, not just a night between hikes. You can look it up. 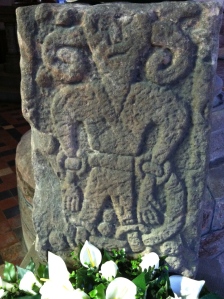 On Day Eight we walked from Orton to Kirkby-Stephen, one of the booming metropolises along the way. (Meaning: more than one place to eat, an ATM, and the first traffic light we’ve seen since leaving London.) We had a fabulous dinner and explored the town and the church, which is named simply, Kirkby-Stephen Parish Church. The highlight of the church for me–worthy of a blog post all its own, perhaps–is the presence of the “Loki Stone,” the Norse god of mischief “Christianized” (according to the authorities) into a devil in chains. The trickster Loki comes to us from the Vikings and has been in place at the church in Kirkby-Stephen since the ninth or tenth century. Who knew?