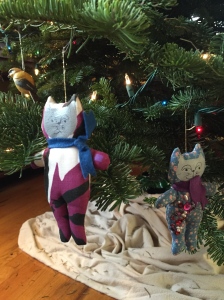 The first Christmas we lived in our house we had cats. Well, we had cats for lots of Christmases, but the first year, they were new, rambunctious kittens. So we got a live, potted tree instead of a dead, cut one. That was in 1993; a guy would drive around in his big pick-up delivering the trees with copious instruction on how to care for them. Then he’d pick them up again a week or so later—any longer and it would hurt the tree to stay indoors. Then he’d sell the tree, along with a hundred others, so some tree farm out in the country. His customers were basically renting the trees from him on their way to being delivered to their permanent home. In 1993 this rental cost about $35, back then the same price as a medium-gorgeous noble fir. After transitioning, once our cats simmered down, back to traditional trees, I looked the guy up a few years ago and he was still doing his thing, but asking $150. I continue to opt for a cut, dead tree.

We bought our cats Christmas presents every year: catnip toys or special treats. One year, I got them these ornaments that we hung each year at the bottom of the tree for them to bat around. We still hang them there even now that the cats have both been gone for several years. 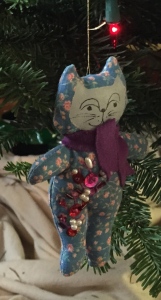 Before we became parents, we had friends over for dinner and we spent the evening talking about our cats the way others talk about their children. A year or two later we had all had kids, and our cats were demoted from being family members to pets. As they got older, I realized I really wasn’t that kind of a cat person. I liked them young or middle-aged, didn’t mind if they were cuddly or indifferent, but wasn’t going to be a good care-for-them-by-any-means-necessary cat owner. I was grateful when they both passed on, and am grateful for the past few years of being pet-free. These little guys hanging from the tree are all the cats we need.

One thought on “The fourth day of Christmas: no cats, not sorry”