Today we said goodbye to the Sea of Galilee, but not before several powerful stops along the shore and a memorable boat ride. Once again, pilgrim Joe McDermott provides his reflection on the day:

One of my favorite books as a young child was about the Multiplication of the Loaves and Fishes as told from the perspective of a young boy. As we read in Matthew 14:13-21, a crowd numbering 5,000, plus women and children, were gathered near the Sea of Galilee to hear Jesus preach. As evening grew, the disciples wanted to disperse everyone so they could go to the nearby villages to get something to eat as they had nothing to feed them. Jesus instructed them to feed the people. The young boy in my storybook offered what little he had – 5 loaves and 2 fish. Jesus prayed over the food and it was broken and shared. The entire crowd ate their fill and there were 12 large baskets when they collected the leftovers. The small amount the small boy shared, after Jesus’ blessing, miraculously fed the entire crowd. A supernatural miracle for sure as I understood it.

I will always remember how I was struck by an interpretation of this Gospel story when I heard it for the first time – years later as an adult. Perhaps it wasn’t a supernatural miracle that the 5 loaves and 2 fish fed 5,000 plus the women and children. Maybe the real miracle was that the crowd all had bits of food they were hoarding to themselves. The miracle was that one person’s small offering inspired others to share. The miracle was that people shared, both of their abundance and of their necessity, and together there amounted to 12 baskets of abundance. I recognize this understanding as the miracle – that when we all share generously everyone has their fill and there is an abundance.

Today, on the third full day of our being together on pilgrimage in the Holy Land of Israel and Palestine, we began our day at the Church of Heptapegon. On this site from 28-350 AD the Judeo-Christians of Capernaum venerated a large rock upon which Jesus is said to have laid the bread and fish before He fed the 5,000 plus women and children. By about 350 AD the rock was used as an altar at the very center of the church built on this site, built by a Jewish nobleman from Tiberius some venerate as Saint Josipos. In roughly 480 AD a Byzantine church with a rich mosaic floor was erected at the site with the venerated rock placed beneath the altar. During the Persian invasion this Heptapegon Church was destroyed and faded into oblivion. After the Muslim conquest (638 AD), Christian activity ceased around the Sea of Galilee for centuries. It was in 1932 that the ancient church ruins were excavated by Fr. Andreas Evarist Mader SDS and team. The mosaics were found surprisingly largely intact. In the early 1980s the ancient Byzantine basilica was reconstructed. 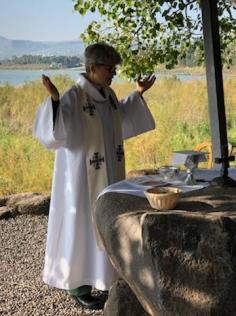 After visiting the church, our pilgrim group gathered down at the shores of the Sea of Galilee where Mother Sara celebrated a moving outdoor Mass. The setting was inspired, sun-drenched lakeshores Jesus walked. In his sermon, Fr Rob acknowledged the historical places we are visiting – where Jesus walked and lived and demonstrated his divinity. But he ever so warmly called us to not only take in the history we are so surrounded by, but also to be at least as mindful of the Living Christ who is with us on this journey. Jesus among us. Jesus within us. Jesus in one another. And so very much alive today.

Do this for the remembrance of me.
Starting position: palms flat, parallel,
now bend whole core toward the altar.
Now raise the chalice, arms an upward O,
and follow with my head.
My own private yoga.
Sometimes I see reflected there
a face stretched out across the silver
like some big broad mama without a care in the world,
shining out from the refiner’s fire.
My weekly guilty pleasure:
that woman in the chalice
looking back at me and saying
there you are! like I’ve just been discovered.

I’m reading Alfred Kazin’s A Walker in the City, loving every moment of it. Every paragraph is a prose poem, a hymn to life in his particular world in the Brownsville section of Brooklyn in the prewar 20th century. 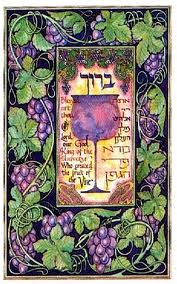 He describes his early religious instruction and it reminds me of the story I grew up hearing from my Jewish grandmother. She was the daughter of a rabbi, who tried to raise his family to be observant and kosher. As she tells the story, she was told that if she or her sister ever broke the Sabbath, God would strike them dead. One Friday evening when she was twelve or thirteen, she was out playing with friends and late getting home. She missed the Shabbat Kiddush and incurred the wrath of her father. She shed a few tears and then went to her room and waited patiently for God to strike her dead. It didn’t happen and she lost her faith.

And this is how my grandmother explained to me that she became an atheist. I’ve told this story a bunch of times, and often someone will say “I grew up with my Jewish grandmother telling me the same story!”

Do you have a Jewish grandmother story? Or your own story of losing your childhood faith? Let’s hear it.